In the first half of the 900 was born an artistic movement called Surrealism; the aim of surrealists was to paint absurd situations and concepts… in a realistic way. This ingenious combination created an alienating sensation in the observer. So I asked to myself: can I do something similar with rendering? Can I do the… Photosurrealism with V-Ray?

When I saw for the first time “The Empire of Light” live – a fantastic painting by Magritte in which he combines day and night in the same picture – I was enchanted! Believe me, live is really breathtaking: 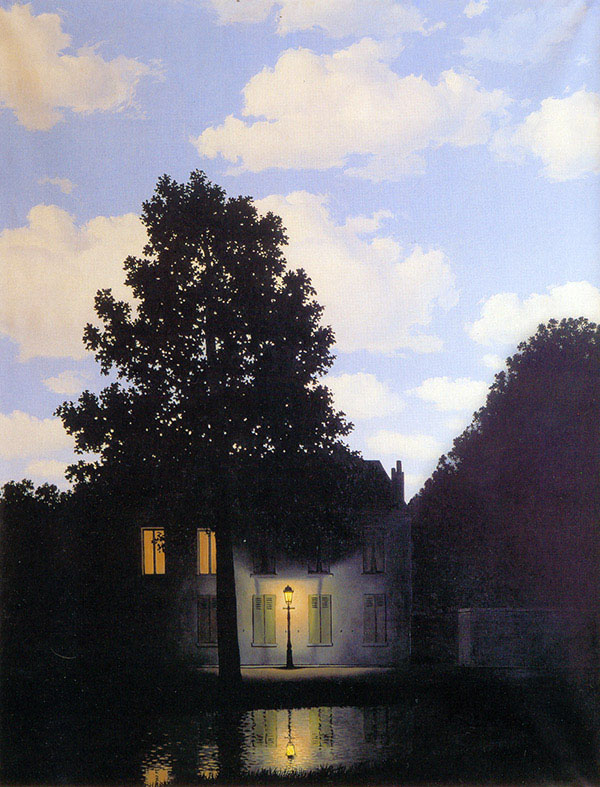 Even if  Magritte lived in the age of the first cameras, I do not think he could see certain kinds of shots at dusk. But in this magnificent picture he goes very close to the photographic reality! In fact, at dusk when a camera photo sees “dark” the sky is still very bright. Magritte fully realizes this, bringing the artistic gesture to the hilt: the night is dark night, and the sky is bright as full day.

If I had told you, you would not believed it, then you’ll look at it and you realize that it works! Day and night coexist in a single canvas, in an unexpected and perfect combination, magnetic and alienating.

Magritte is realistic in the use of light, but not in the details so I launched! :-)

First of all, I reconstructed the scene, respecting the proportions, finding details between the different versions that Magritte did of this painting. That’s the model that I created, quite clean and simple: 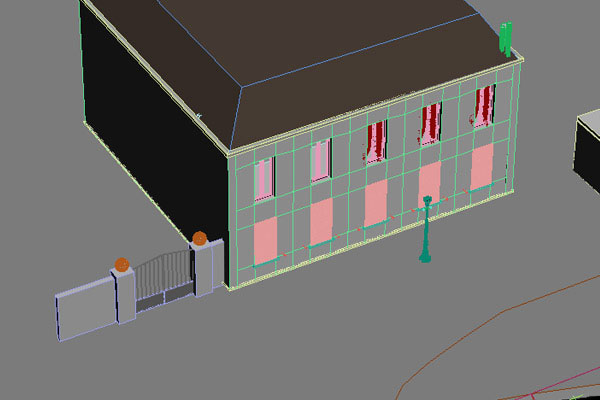 I placed the camera as similar as to the original, using the same exposure as you would use at dusk (1/10 of a second), and I placed artificial lights with similar power, positioning them where they are in the picture. As usual without using tricks or strange things.

Below the diagram of the light balance, with the result – Click to enlarge: 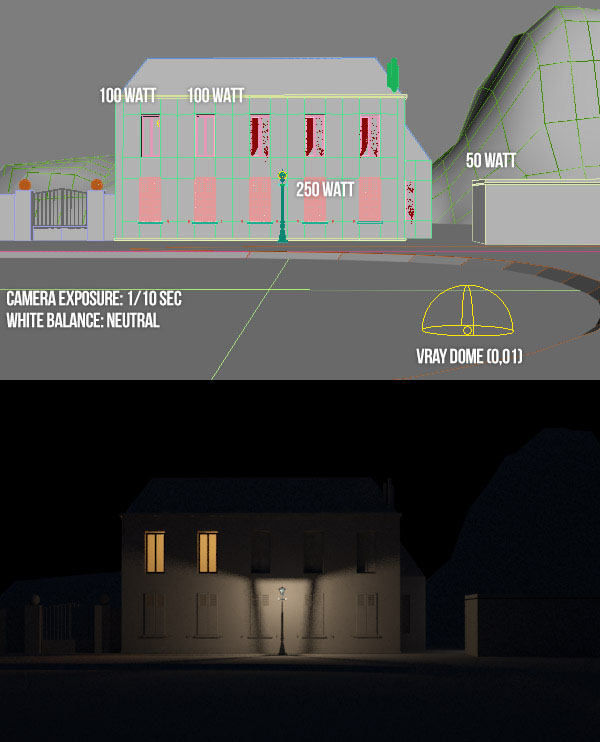 Much of Magritte’s work is characterized by vegetation in silouhette.

Lately I’ve been using Forest Pro (which I highly recommend), so in a few minutes I placed all the trees and grass where necessary, in order to achieve the desired effect. 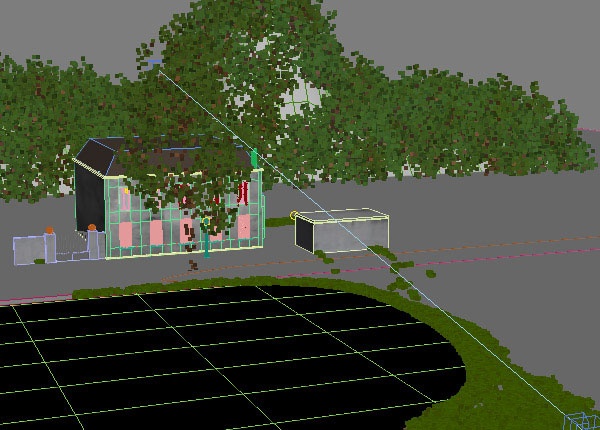 Finally add the element that characterizes the day. I found a beautiful sky on google images, I placed it on a backdrop arranged ad hoc. Then I applied a texture with the VRayLightMaterial that allows you to make light textures (multiplier 2.0): 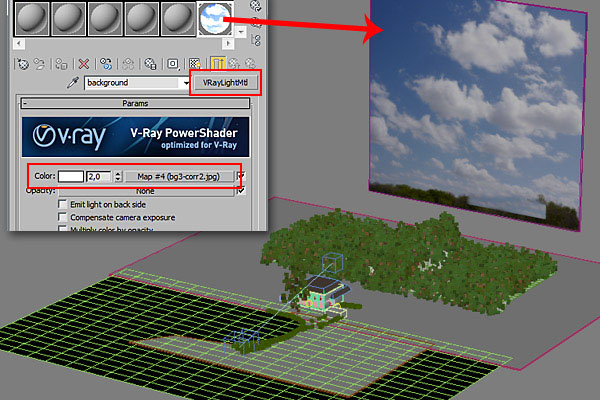 Note: I could add the background in post production, conceptually it is the same. But many trees in backlight could give me masking problems due to the antialiasing. So I decided to incorporate the background directly in the render.

Compared to the original painting, in this render the vegetation gives some detail, which contributes to realism: 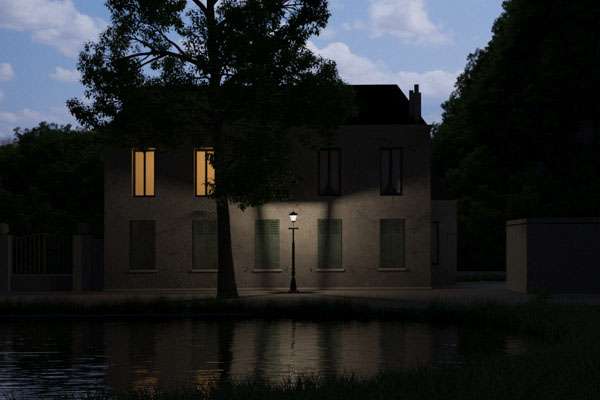 Let’s go back to Magritte: the particularity of the work is the middle of the day in the upper part and the lower part of the night. In fact, if we isolate the two pieces seem to come from two completely different moments of the day: 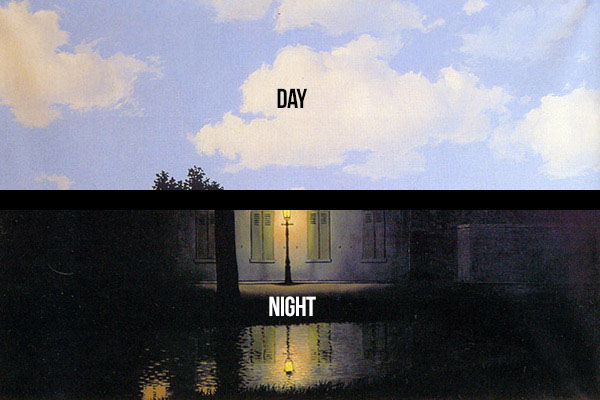 The “lower part” also includes the lake, in the context does not reflect the sky. On the contrary, this happens in the render and we must avoid it.

In this current state V-Ray can exclude  the reflections of a specific object from another object. In other words,I can not cause the sky to reflect a bit on the leaves but not in the lake, unless you make turns crazy. This is still possible even if support from the Chaos Group I learned that (probably) will be implemented sooner or later.

You will be able to write 1,000 books about how to use software, but the only important thing is just to have in our mind the final result, in this case we will reach it into Photoshop. 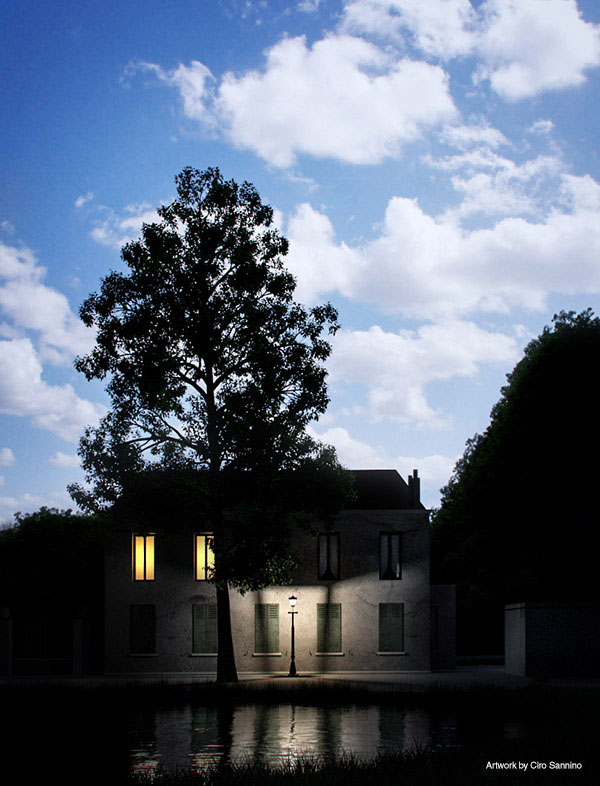 IS EASY , BUT REALLY IT IS?

If you thought it was simply is because … IT IS SIMPLE . It is simple if you have clear points of reference and do not proceed by trial and error , it is simple if the reference points are the photograph.

I agree because it is clear that you have to practice and practice. And thank goodness! But large part of the problem is the lack of (often) a strong knowledge of art, in this case is photography of sure. Knowing the photography I can use 4 things, so linear and smooth and achieve this by exploiting the mentality photographic. On the contrary, if I know all the manual by heart, without photographic principles I can make just a series of attempts… and good luck!

Conversely if you have a strong knowledge of photography and also know a method, this is really easy and possible for everyone! Study photography applied to V-Ray and our method to produce (5SRW) subscribing our online course now!

Going back to the last picture, who knows .. perhaps  today Magritte would achieve that?
Ciro Sannino